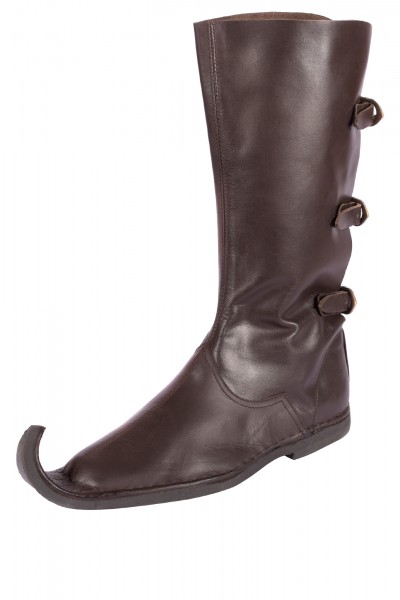 Although documented since the high Middle Ages already, peaked shoes and peaked boots (Poulaines) only really came into fashion in the late 14th century. This type of footwear then enjoyed such popularity around 1450 that even so-called sumptuary laws were enacted in order to regulate their wearing and restrain the collateral "excesses". In 1463, under the reign of Edward IV of England, knights, squires, noblemen and other citizens were prohibited from wearing shoes with points exceeding 2 inches in length. This law was even further tightened in 1465, as cobblers and shoemakers were altogether banned from crafting shoes with points longer than 2 inches.

Our boots can be freely adjusted and fastened through three buckles and riveted straps. Unlike their medieval forerunner models, the sole of these medieval boots is made of charcoal-grey hard rubber.

Only real consumers can give a rating and write a written review. The stars show an average of all reviews. We publish positive and negative reviews after our review.