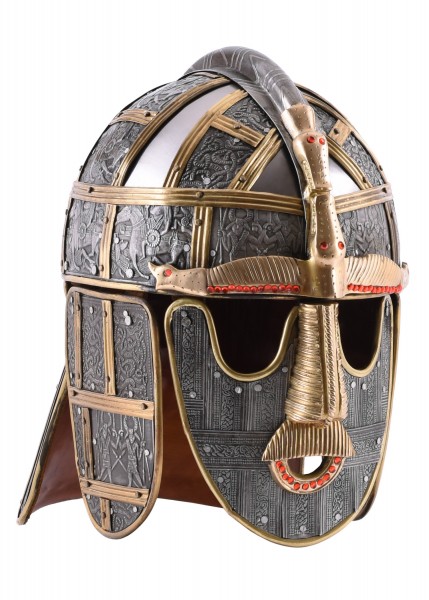 The archaeological site of Sutton Hoo, located in the English region of East Anglia, includes numerous burial mounds. Most famous among those is the ship-burial from which remarkably well-preserved, precious artefacts dated back to the 7th century were excavated in 1939. The likely best-known finds from this grave are the famous Great Gold Buckle and the Helmet of Sutton Hoo, both significant testimonies of the quality of Anglo-Saxon craftsmanship.

The helmet is widely believed to have belonged to an Anglo-Saxon ruler and was most likely crafted in the early 7th century. Historically, it shares similar features with other early medieval Germanic helmets such as those found in Vendel und Valsgärde (Sweden).

The helm was excavated in hundreds of pieces. The original, reassembled fragments as well as a very elaborate replica by the Royal Armouries are today both on display for people to admire at the British Museum in London.

Our replica may, admittedly, not be as perfect as the one crafted by the Royal Armouries, but is nevertheless a highly decorative, brilliant (in every sense of the word) showpiece of early medieval armour, which, on top of that, is fully wearable. The helmet is lined with leather on the inside.